In the next few weeks, campaigns will be releasing their third quarter campaign finance reports, for which the books closed on September 30th and which are due to the Federal Election Commission on October 15th. Reporting on these reports typically focus on amount raised in the quarter and the amount of cash on hand, as exemplified by this New York Daily News article from the last quarter. These headline numbers are no doubt important indicators of candidate viability, and as multi-candidate primaries are something of a coordination game, this viability information is important for potential primary voters deciding whom to support.  However,  the FEC reports provide data that allow us to answer questions about candidate strength that go beyond these headlines.  To that end, I encourage reporters covering the campaigns to consider the following questions:

Thanks to those of you who have sent feedback on my working papers.  Revised versions of the two working papers I have previously placed on the site can now be found here and here.  Also, for an expanded research statement, please see my research page.

Which messages from which messengers mobilize campaign contributions?  This is the question I tackle in my latest working paper.  To answer it, I constructed a time-series cross-section dataset that matched advertising data from the Wisconsin Advertising Project in 2004 to data on individual campaign contributions from the Federal Election Commission by county and day. In order to minimize concerns about omitted variable bias, I limit my study to non-battleground states and include both day and county fixed effects.

Consistent with the social identity approach (applied to partisan identity) the paper uses to frame the analysis, I find that: 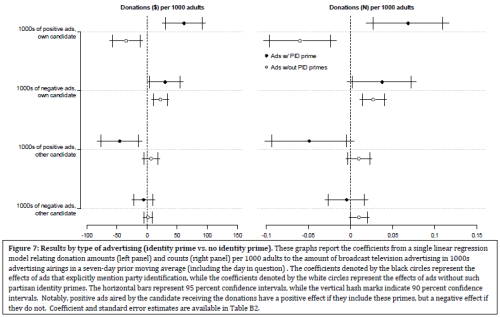 I conclude that partisan identities strongly frame the way that potential donors respond to political messages. Importantly, these findings are consistent with other recent work on campaign contributions, such as Adam Bonica’s finding that Joe Wilson’s “You Lie” comment during the 2010 State of the Union both raised money for Wilson and Wilson’s opponent, and that these donors were more ideological extreme than earlier Wilson donors.

I’ve also updated my earlier paper on using the effect of advertising on giving evaluated with the broadcast advertising experiment conducted with Rick Perry’s 2006 gubernatorial campaign.  Thanks to all who contributed helpful feedback.  Also, since Rick Perry is now running for President, his campaign has put online all of his old ads, including the one used in the experiment which you can now view on YouTube here.

Newly announced Republican presidential contender Rick Perry has taken some flack  for the substantial fundraising he has done among executives of major Texas corporations whom also benefit from public policy he supported.  Matt Yglesias rightly points out that it would be unfair to infer from this observation that Perry is corrupt. After all, every politician favors certain public policies, and others who also support those public policies will sometimes contribute to help get that politician into or stay in office.

But  do potential donors actually respond to politician’s messages?  Do they respond to Rick Perry’s? In a word, yes.

My recent working paper sheds light on this very issue, in fact looking at Rick Perry’s messages and donors, taking advantage of a randomized controlled trial, the gold standard for causal inference.  During Perry’s  2006  gubernatorial  campaign, Texans for Rick Perry invited in political scientists to conduct field experiments to test the effectiveness of a variety of aspects in his campaign. In  research from this set of experiments, published earlier this year in the APSR, Gerber, Gimpel, Green, and Shaw (gated) show that one of Perry’s advertisements, broadcast on television and radio in January 2006, was indeed effective at persuading voters, but that this effect was very short lived.  Matching the randomized schedule of this advertising (included in the paper) to Texas campaign finance records by county (or media market) and week, I find that that radio and television ads also increased the donation rates and donation amounts, as documented in the figure from the paper reproduced below.

The full working paper can be found here, where I go into greater depth about who responds to these messages with donations (feedback would be most welcome). Of course, this is just one advertisement in one month in one election campaign.  Whether it was the positive tone of the Perry ad or the specific policies cited that generated this support among donors, I cannot say. However, my 2011 APSA paper looks at the effect of advertising tone and policy content on campaign donations in the context of presidential elections, so more will be coming soon on those questions.

While there have been a handful of cases of corrupt officials, those cases generally involve payments outside of campaign donations.  There’s generally little evidence to suggest that campaign donations influence lawmakers to support policies they would not have preferred otherwise, especially as legislator positions have become increasingly homogeneous within parties. For certain, wealthy citizens have a disproportionate impact on American public policy. However, to the extent that this influence  is the result of campaign contributions, it is much more likely achieved by helping favored campaigns bear the costs involved with winning elections than it is by buying specific favors from elected officials.  In short,  the fact that Rick Perry has been successful at fundraising  is better evidence of his effectiveness at pursuing and communicating his agenda — one admired by his donors, who can contribute unlimited amounts under Texas law — than of any corruption.

Welcome to my new blog. I plan to use this space to post occasional musings on political science and politics, particularly when those musings relate to my own research and don’t fit into 140 characters.  Thanks for stopping by!